Salvager of the Deeps

Deutista Ward has been a salvager of the Deeps for several years. She is a serious woman, all business and very pragmatic in her outlook. She also follows a strict code of honor, and will not deviate from it, even for profit. She’s seen too many other salvagers over the years lose their lives over petty disagreements and greed, and she’s determined not to follow in their path. She’s ventured as far down as the Third Deep, but hasn’t tried to push any further. She has an artifact sword that can extend out and grab surfaces and even people, making it a very useful tool when exploring the Deeps.

Recently, Deutista has joined The Company of Shards and has been adventuring with them throughout the world. Deutista worships Ekambar. 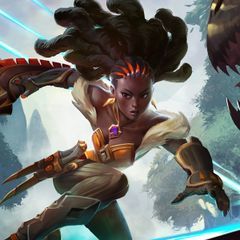 Ascendant campaigns can view previous versions of their pages, see what has changed (and who did it), and even restore old versions. It's like having a rewind button for your campaign.

We've already been saving your edits, so if you upgrade now you will have instant access to your previous versions. Plus, you get a 15-day free trial, so there's nothing to lose.